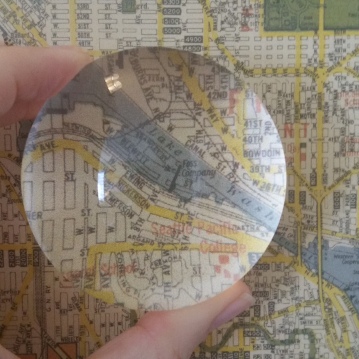 Seattle once had a neighborhood called Ross. As the city evolved, the name was lost, but my old map still shows streets overlapping the water. The Wedgewood Historical Society was nice enough to explain what happened:

When the Army Corps of Engineers built the Ballard Locks a 100 years ago (and the waterway which connects Lake Washington to Puget Sound) they dug out a few streets. The fun part is that my old 1950s Seattle map still shows those “ghost streets” in the water. Kinda spooky.